skip to main | skip to sidebar

I haven't posted in so long that I am typing this just to have something more recent on here. Maybe I'll think of something awesome or hysterical to say soon.

I could be all depressing and mention that we had to put one of the dogs to sleep last week. Nothing like a dozen paragraphs about children sobbing over a corpse to pull in the readers.

Or I could describe the way the cat will lay across my neck during the night. An optimist would say she really likes being close to me. A pessimist could say she's trying to kill me. As long as I'm still typing, I'll be optimistic.

Stay tuned.
Posted by Jodi at 8:29 PM No comments:

Thanks to a surprise snow, I'm able to stay home and watch the inauguration on TV. I am riveted.
Posted by Jodi at 10:59 AM 2 comments:

My 15 year has his first serious girlfriend and I am finding it necessary to talk to him about sex. Not because he is there yet, (please, please, please), but I don't have 100% control over his decision about when, now do I? No, I don't. And I'm smart enough to realize that.

I did not sign up for this. Where is the exit?
Posted by Jodi at 2:57 PM No comments:

The Revolution Will Be Televised

I didn't revolt, actually. After months...nay, years of resisting, I became a complicit party in the acquisition of a new television. Not that we needed one. Our 36", 800 pound TV worked fine. This minor detail has been, for a long time, my successful stalling tactic.

Then the remote control sensor quit sensing. The spouse saw an opening and suggested getting an LCD TV. Being the thrifty one of the pair, I just ran the cable through a DVD player and used that remote to change channels. I was triumphant; he was defeated. I knew I was just buying time. Yes, I knew.

My spouse demonstrates a pesty predilection for purchasing items when I'm not around to protest. History warned me (in the deep, authoritative voice which history tends to use) that one day soon I would come home and find a new TV sitting in the living room. So I decided that I could be part of the process and at least have a say-so in which TV to get.

After driving around and reading and researching, we picked a new TV. A very large, very expensive TV. And the spouse was there in line, waiting to pay for this behemoth. I meand 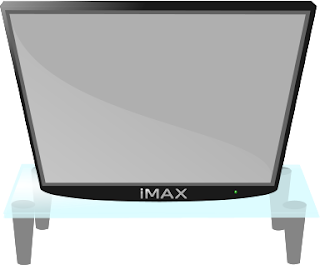 er over, start to say something to him and glance down. On the other side of this giant box he has carefully concealed a Blu-ray disc player.

Yeah, because the TV isn't expensive enough? Well, this man is having shoulder surgery tomorrow. I was all prepared to be Nurse Nightingale. Maybe even the Naughty Nurse later. Now it is FULL ON Nurse Ratched. Hey! Maybe we could download that movie on our new Internet-capable TV and he can watch all 46" diagonally measured inches of it while I stand just out of reach, dangling his bottle of painkillers!
Posted by Jodi at 8:44 PM No comments:

Well, the cabin is "finished." I used quotation marks because really, is any house ever finished? No, of course not. We still need to put stone on the foundation and chimney, some landscaping, more kitchen cabinets. But we had 18 family members there for Thanksgiving. For several days.

EIGHTEEN. And nobody died. Well, one person ran into a ditch trying to make his getaway, but the spouse revved up his monster truck and pulled the Jeep out.

Oh, and there were eight dogs, as well. Including my dad's dachshund, who is not neutered (my dad or the dog)so he tried to hump every other animal (the dog, not my dad) . But he's really cute so I didn't kill him (my dad or the dog).

Did I mention that my husband is somewhat of an introvert? Doesn't like large crowds for any length of time. And did I mention that he has a torn rotator cuff (surgery, 12/29, yeah I'm excited to do this again) so he is in pain 24/7? Woo hoo! Recipe for grumpy spouse! Just add hydrocodone and burbon!

Even so, everyone (else) had a nice time. I think. Lots of food, games, merriment. We didn't run out of toilet paper, for that I am grateful. Because this family? We are seriously full of shit.
Posted by Jodi at 10:14 AM 1 comment:

This is totally a posed picture of my dog. I call her the Play-doh dog because I can shape her body,

hair, and (obviously) lips and she just lets me. But will you look at that dentition? She broke her front teeth opening bottles of cheap beer back when she lived on the street.

When Did this Happen? 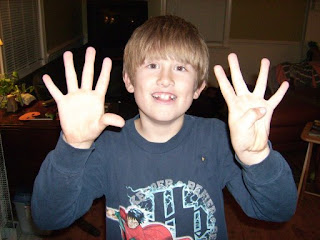 He turned 9 this winter. How is that possible?

BTW, he gets that hitchhiker thumb from his dad. They eyes are exactly mine. The dimples from his paternal grandmother. The blond hair? Maybe the mailman.
Posted by Jodi at 10:00 AM No comments: 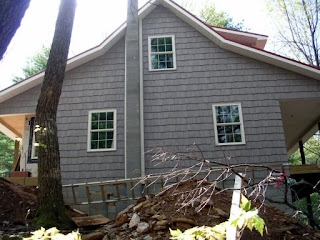 Siding is almost done. Wood walls and ceilings going in. Money draining out. Painfully. Hopefully this summer the spouse will be able to do some things himself, such as the tile in the bathrooms and the light fixtures. Meanwhile, I'm going to check into the market for human body parts. Rumor is I can get right good money for a kidney.
Posted by Jodi at 9:51 AM No comments: 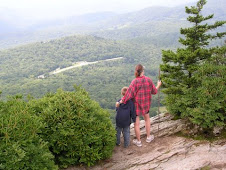 Rob and me. Grandfather Mountain, NC. Geez, I look bowlegged here. I'm not.

Jodi
I'm a librarian. This means I like to organize things. Perhaps there is a bit of OCD involved, but you'd never know it from the state of my house.